Making of the Documentary.

After a realisation of a shared interest in Scottish history, and Macbeth in particular, Alex Wright and Sara Brockbank of Flying Mirrors collaborated with Cameron Taylor (known locally as Mr Macbeth) from Moray Speyside Tourism, Paul Johnson of Carden Holiday Cottages and Dave Barr of Duo48 to create a documentary on The Real Macbeth.

As Cameron had already co-written a book ‘On the Trail of the Real Macbeth‘, the storyline almost wrote itself, with Cameron speaking to camera and the voice of Gruoch, Macbeth’s wife, linking the scenes together. The province of Moray held a prominent part and locations included picturesque Forres, vibrant Burghead, atmospheric Birnie Kirk, standing under an ancient sea and atop a windswept mountain; with icons including Sueno’s Stone, an old Pictish standing stone outside Forres, and the Stone of Scone where all the Scottish kings were inaugurated. 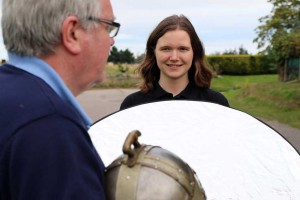 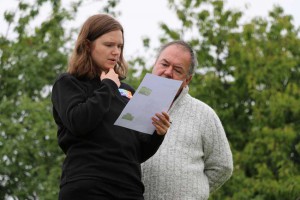 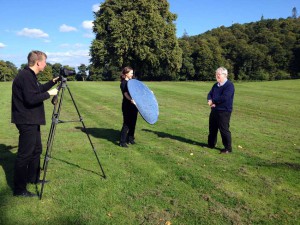 The sun blessed us on our chosen days of filming, with beautiful skies and fluffy clouds, sometimes with torrential rain the days before and after. This really helped with the vibrancy of the video that we shot as well as keeping our moods high in the lovely weather.

To be as economical as we could with fuel, we shot the scenes out of sequence, which proved to be a little problematic for our star:

The hardest thing to do was film the last scene first. It felt so wrong. In the event we decided to redo it, much to my relief.

Thank goodness the local Forres resident who mistook the helmet I was holding for a human head didn’t phone the police. 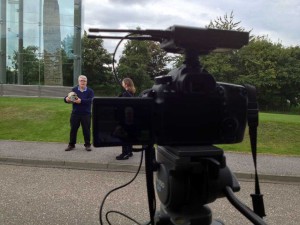 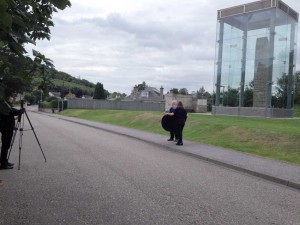 We all felt that she was incredibly brave to come out of her house and check on what he was doing.

Outside the village of Lumphanan in far off Aberdeenshire, we wondered what we were doing as we struggled through long wet grass to reach a stone to film. This rock is said to be where Macbeth was beheaded, though as Paul was wringing the water out of his socks later…

Couldn’t we have just filmed any rock? One rock looks just like any other.

The price we pay for our art.

The days of filming were happy and relaxed, with superb picnic lunches provided by Paul. The team was great and we all seemed to share the same quirky sense of humour, taking nothing too seriously.

One of my favourite memories is seeing Cameron spreading his ‘wings’ and flying back to us after walking sedately off camera.

Everyone brought their own particular skills, knowledge and perspective to the project and the end result is a co-creation greater than the sum of the parts.