Macbeth, murdering villain right? On finding out that not only was Macbeth a real man, he was a good and successful king, and realising that we had Cameron Taylor, a Real Macbeth enthusiast and once named Mr Macbeth himself, living on our doorstep, we decided to take on Michael Fassbender and StudioCanal to present the truth and debunk the myths that Shakespeare created.

Happily for us, Cameron was willing and eager to go on camera to document the life of this incredible man who lived one thousand years ago. Cameron brought in Alistair Murray, his co-author of the book On the Trail of the Real Macbeth, King of Alba, and during one of our early meetings I suddenly found myself agreeing to do a linking voice over as Gruoch, Macbeth’s wife. Unfortunately Alistair had to withdraw due to other commitments, and so it was left to Cameron and myself to carry the story.

Paul Johnson of Carden Holiday Cottages enthusiastically brought his knowledge and experience in promotion to the group, while also keeping us all relaxed, well fed and watered during our filming expeditions.

After a basic scripting for Cameron and a more detailed scripting for me as Gruoch, we identified the locations to film in and set the date of our first filming session.

Starting with a sumptuous breakfast of pork and chive sausages from the local butcher, we set off to start filming in Forres, the picturesque town that Macbeth surely would have known and perhaps lived in for part of his life. Apologies to Cameron for deciding to start with the final scene, it can’t have been easy to sum up everything that you had said in the movie, before saying it! (Note: We re-recorded the end again at Mosset Park, Forres, scrapping the original footage recorded outside the Falconer Museum due to car noise. In the end, Cameron did some up everything after recording the rest of the movie.)

Cameron was such a pleasure to work with and such a fount of knowledge. We had much fun and laughter while filming, as well as learning so much and hearing various anecdotes and stories that unfortunately wouldn’t have worked as part of the documentary. At the end of two fruitful days of filming with Cameron, I was sorry that that part was over so soon, and I was already missing the good natured banter between the four of us. 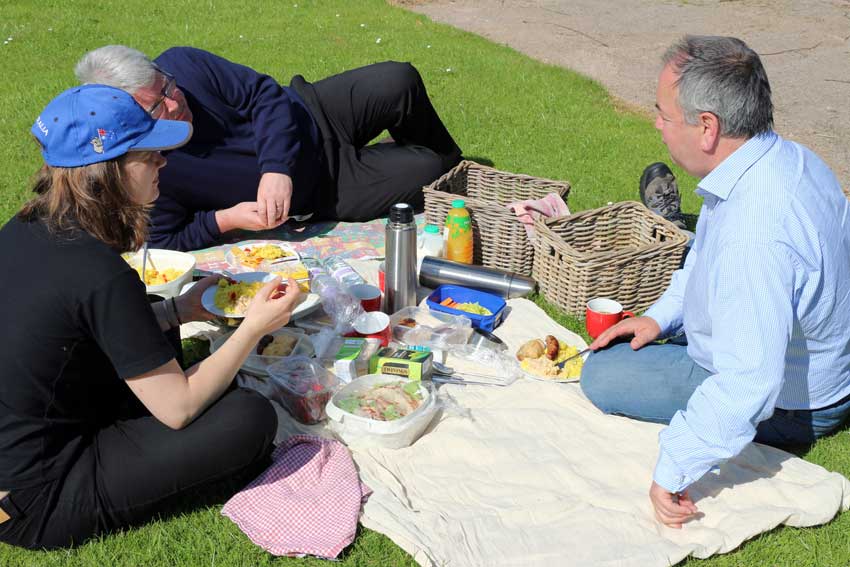 A sumptuous picnic near Birnie Kirk.

When Cameron asked for permission to film on the Burghead headland, Joan Megson of Burghead Visitor Centre was very welcoming and highlighted the upcoming Burghead Viking Festival, complete with a small scale replica Viking longboat. We had great fun filming the festivities on the day and the Glasgow Vikings were incredibly friendly and helpful, mocking up some fighting and charges especially for us. We made this video for the Glasgow Vikings in thanks for their willingness to pose for us.

All we needed now was someone to be Macbeth, and our website designer, Dave Barr (BARRD Web Development) pointed out that he had a scar, a celtic tattoo, and most importantly the right facial hair for the time. So with Cameron’s replica sword, axe, helmet and cloak and a trip to Forres Fancy Dress Hire, we had our Macbeth. After a full day of filming Dave sitting, walking, attacking the camera with weapons, running up a hill, marrying me and gazing off into the distance, we had lots of excellent footage and one happy Dave proclaiming that it had been the best day of his life. I’d consider that a resounding success. Alex created the video Dave Goes Berserk. A Comedy Trailer for The Real Macbeth with some of the footage of Dave testing out the weapons and armour.

Before filming Dave, we had been thinking that it would be good to find other people to be some of the more minor roles, helping flesh out the documentary to make it more visually interesting. So when a friend of ours joined us on Califer Hill (where we happened to be filming Dave) showing his friend Ormungandr Melchizedek the sites, I think I gave Ormungandr a bit of a surprise as I asked if he would be willing to be my husband. He had the right facial hair; what can I say? Anyway, as his face lit up and he asked “Can I wear the helmet?” I guessed that my luck was in: we had found our Gille Comgain. We really appreciated his willingness, especially when asked to lie on the cold stone and pretend to be dead.

Our experience with Ormungandr opened my eyes to the possibilities and I started seeing men with the right facial hair everywhere. Friends and strangers alike were roped in and I was delighted by the willingness everyone showed. We really appreciated how they all contributed, and with the hill fort graphics created by Josh Johnson they made the documentary really come alive. 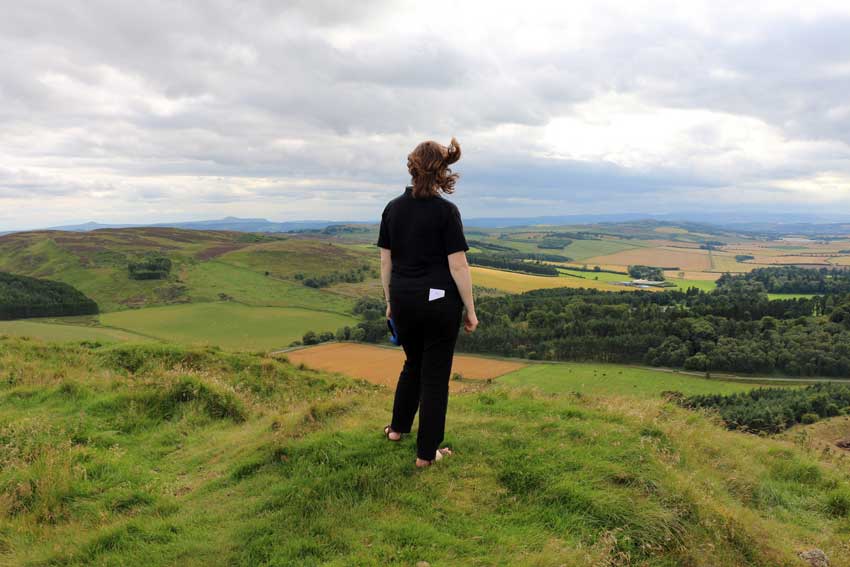 Sara taking in the view at the top of Dunsinane Hill, Perthshire, where Macbeth was defeated in battle.

To bring it all together and get it ready in time for the premier of the StudioCanal film, Alex was finding himself needing to work around the clock at times. Prior to one showing to the crew he ended up working a full 36 hours straight on editing, and was still able to function when being asked questions or given suggestions at the showing.

Finally everything was in, the music approved and purchased and the credits complete and correct. It was time to send it off to be made into DVDs. Our premier was booked for Forres Town Hall and was starting to take shape, with the Northern Scot running an article on it and Eventbright filling with bookings for tickets.

It was very exciting to see the boxes of DVDs arriving, then coming to the Town Hall on the night of the premier, and it all started feeling real. It suddenly hit me, my dream as a kid had come to fruition without me even really realising it: I was in a film as one of the main characters. Seeing my face blown up to the size of the big screen was quite strange and surreal, yet also a very good feeling. We were overjoyed at the number of people who joined us for the premier. We ran out of seats downstairs and people had to start filling up the balcony, so we estimated that about 180 people had come to see our documentary. What a feeling of elation.

The audience certainly seemed to enjoy the evening, with exit polls giving a lowest rating of 8/10, and many books and DVDs being sold.

We would like to thank again everyone who was involved in any way for the time, enthusiasm and commitment that was shown again and again, resulting in the excellent documentary that we produced. 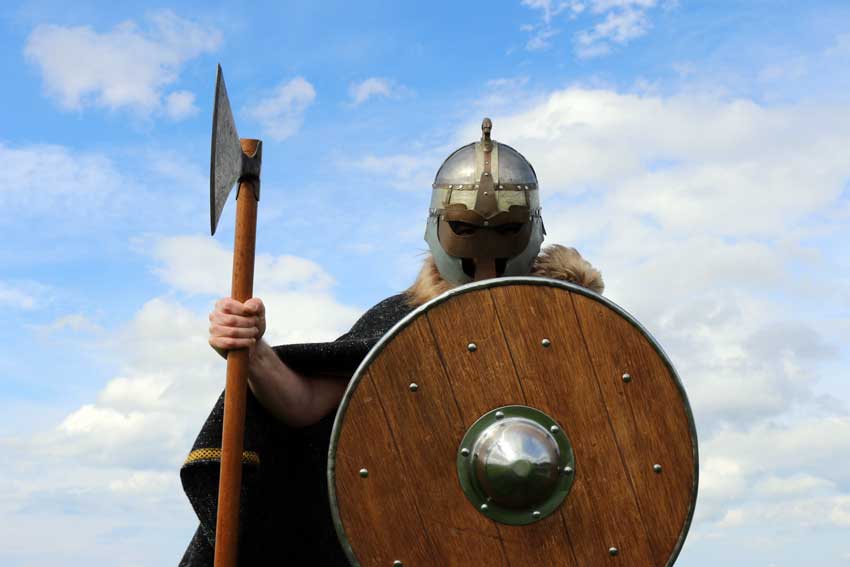 Dave Barr, who stars as Macbeth (Mac Bethad) in the movie, dressed up in full 11th Century armour and weaponry.